Zsh is your friend

I don't know if you know this, but ZShell is your friend, you might not know it yet, but its true. I know what you are thinking , "whats wrong with Bash?", nothing, except its not Zsh.

Its not that Bash is a bad guy, I don't want to put him down, but if we were picking teams, Bash would be last picked in gym class.

He isn't very versatile and he doesn't do anything particularly great, all in all he is kind of just a worse Zsh(or Zsh is kind of like a better Bash).

Zsh is easy to get started with because it looks and acts like bash in a lot of ways. So if you are familiar with bash don't worry, you can try zsh out without skipping a beat and you still end up with a better shell.

Why is Zsh better than bash?

Okay, I know what you are saying, big deal right? Well how about really great built in auto-completion for common commands. Lets use Kill as an example. You type:

in bash, you get what, the list of all files that are in your current working directory. Not very helpful behavior in my opinion. What happens if you type: 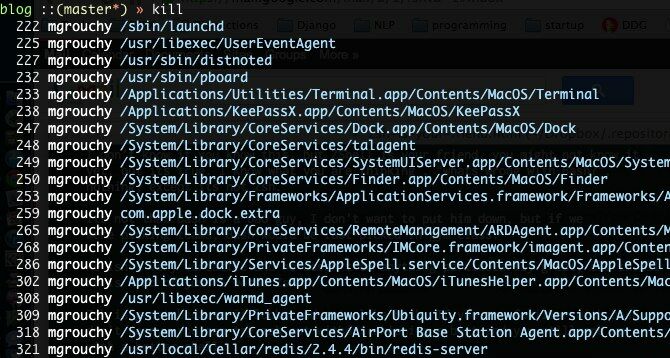 Lists of all your processes with pids? Yes please.

Another thing that make makes Zsh stand out is shared history. If you are anything like me you live in the terminal all day long. There is nothing worse(I'm exaggerating) than opening another terminal in a tab and navigating your history looking for that recent thing you just did in another window and have it not be in your history. In Zsh this isn't an issue.

Okay, so we have great, fast autocompletion and shared history. How much more awesome could there be? Lots!

Hey thats pretty cool, autocorrect for known commands. What would I do without you(besides type the command again)?

Even cooler than autocorrect, for the super nerd(like me) Vi and emacs mode, shit yeah, you can have your favourite editor on your command line. It will support common movement commands and editing modes, like command and insert mode for Vi.

Last but certainly not least, Zsh has oh-my-zsh from the website:

A community-driven framework for managing your zsh configuration. Includes 40+ optional plugins (rails, git, OSX, hub, capistrano, brew, ant, macports, etc), over 80 terminal themes to spice up your morning, and an auto-update tool so that makes it easy to keep up with the latest updates from the community.

I know one exists for bash, but I find oh-my-zsh to be excellent, it autoupdates, has great plugins and a very active community behind it.

All in all, Zsh is pretty great, so if you haven't tried Zsh, maybe its time you try it out. If so oh-my-zsh is a pretty great place to start.

Also related reading, a book that was recommended to me with a lot of great Zsh tips as well as Bash tips for those who I haven't convinced yet is Bash to Z Shell: Conquering the Command Line.

EDIT: If you are interested in learning more about Zsh, check out the Zsh FAQ. Its very complete and much better than I could do in a very basic blog post.